Today wrist watches serve an almost singular purpose that is quite removed from the watch’s actual function. In the days of yore, watches (pocket or otherwise) were an invaluable tool that could be found rarely more than an arm’s length away. Today is quite different. Ask anyone the time and he or she will, without fail, remove a mobile phone from their pocket. Wrist watches, despite being more accurate than ever, exist primarily as a fashion object.

Mechanical watches in particular have succumbed to this change. Before the nineteen sixties the only watches available on the market were mechanical. Such a watch requires the winding of a spring which is then allowed to slowly unwind over time- the period of which is regulated by an oscillating balance wheel. This controlled release of energy moves the wheels and pinions beneath the dial which in turn move the hands allowing one to read the time of day. They are fidgety though and in order to keep proper time, mechanical watches require extreme cleanliness, lubrication, and periodic service.

In the days when only mechanical timepieces existed, watchmakers abounded. The world changed with the introduction of inexpensive quartz watches and later the ubiquitous mobile phone. Many individuals no longer find it reasonable to keep a high maintenance piece of equipment with such a singular purpose and as a result the field of experienced watch technicians has contracted. At the same time the price of a solid Swiss made mechanical watch has climbed to a level where it may be considered irrational for those other than a dedicated horological enthusiast to make such a purchase.

I didn’t realize I happened to be one of these enthusiasts until I stumbled upon an advertisement for a watch manufactured by Breitling. This watch, known as the Navitimer, captivated me by the complexity of the dial and the movement beneath. It took many years but I finally saved up enough money to buy a secondhand Navitimer; from that moment was smitten and soon set my eyes towards my next prize.

It was sometime later before my interest in watch repair was kindled. With market fluctuations as they have been for the past several years, when it came time to invest a little cash my wife and I decided to look at commodities. In this case we invested in a vintage Omega timepiece known as a Speedmaster. The watch immediately went into the safety deposit box but not before I had an opportunity to fawn over it.

Within days I had found an individual selling the workings of another vintage Speedmaster– completely disassembled in a small tin. I did some calculating and determined that it would be possible to reassemble the watch at a fraction of the cost of a properly functioning Speedmaster. I may have been naive but if so then the purchase of that little tin filled with gears and springs has been one of the better blind mistakes I’ve made. 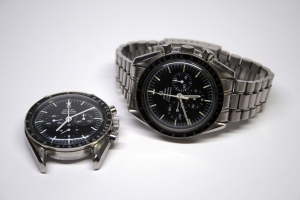 As of today I am in much more than the cost of a properly functioning vintage Omega Speedmaster but for my investment I have obtained most of the tools necessary to feed my interest while flipping vintage timepieces. I spend a few hours every day servicing wrist watches and familiarizing myself with various challenges each new movement can deliver. My hope is that a year or so down the road I will have obtained the skill and knowledge necessary to become a properly certified watchmaker.

I don’t believe it’s a second career in the making, but it is the foundation of a hobby that feeds the soul… and potentially the piggy bank.  😉