I picked up this neat little cocktail watch several months back on account of it being solid 14k gold with diamond accents. 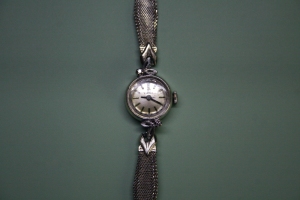 Knowing there isn’t much of a market for vintage women’s watches (especially of the mechanical type) but wanting to challenge myself with a small movement, I thought it would be a fun project and that I might just inherit a new skill to add to the arsenal.

I found the watch to be ticking but unable to keep time as you can see from the timegrapher readout below.

I haven’t really explained how the timegrapher works in the past so I’ll give it a go now.  Horizontally running across the top above the LCD window you see the headings Rate, Amplitude, Beat Error, and Parameters. Within the window, immediately below these headings is the data for the movement being tested. The timegrapher uses a sensitive microphone to listen to the ticking of the movement then translates this sound to the data above.

Below the numerical data is a visual representation of the ticking movement. The dotted lines represent the “ticks” and “tocks” as heard by the microphone. You can see the watch is gaining time as the lines are climbing from left to right. The space between the two lines is a visual representation of the beat error. This is a little more difficult to explain so I’ve linked a YouTube video that does better job of explaining the phenomena. Essentially we’d like the beat error to be as close to zero as possible.

Heartened by the reading on the timegrapher I broke down the movement for a complete cleaning.

As I expected the dial could use a refinishing but the movement itself was in fine shape.

A little bit of rust was found around the keyless works which is typical of most watch movements as the plates are plated brass but the screws, pinions, levers and springs are usually carbon steel. When moisture enters the watch it’s usually through tube for the winding staff.

Breaking down the movement was a slow process which I documented meticulously;  I did not have a service sheet for the Tissot 709 movement and I knew I would need to refer to the images during reassembly.

Since this is neither a chronograph nor an automatic movement there were much fewer pieces to keep track of, but being that this is a women’s watch the parts are much smaller! I found assembly to be much more challenging than usual- especially when it came to setting screws.

Things went pear shaped when I reset the balance. Forgetting that this watch had a beat corrector, I set the balance to determine the alignment of the roller jewel before again removing the balance cock to adjust the collet. Unfortunately I was a little to quick with my movement and didn’t see that the balance wheel was hung up on the center wheel.  This resulted in the stretching of the hairspring.

This was a rookie error that will not be repeated. I’m afraid there’s no amount of effort that will set the hairspring right again.

Fortunately a replacement balance could be found in a used movement on eBay and as a bonus the movement came with a usable dial. In lieu of swapping out the balance, I cleaned the replacement movement and used it instead.

I cleaned the case and bracelet in the ultrasonic cleaner and replaced the scratched acrylic crystal to finish the project.

In the end this watch looked as just as good as I had hoped it would. It was a learning experience for sure and I wish I hadn’t ruined that hairspring but in this case I think all is well that ends well.