Among the items on my bench today are two Swiss Pierce watches. One I received from the Bay has a series of maladies which are testament of its long life of service. Missing parts, broken bits, and an accumulation of grime and grit inside and out. 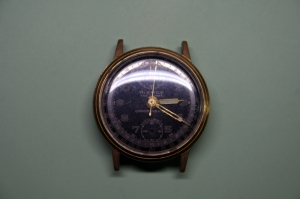 By last night I had already cleaned all the components of the mechanism, sourced a replacement intermediary wheel tension spring, and drilled out the broken chronograph pusher from the case. The watch responded accordingly and was happily beating away with 300° of amplitude and little beat error. I was surprised at how heartily it had responded to my novice hands.

Well this morning it was a different story. Once I get a piece running I generally keep it ticking as they seem to be happier that way (as opposed to constant stops and starts). With the work I’ve been doing recently that means I have five watches to wind each morning. This morning the patient that had responded so well to treatment yesterday was a bit worse for wear.

The balance just barely rotated and I could wind until the cows come home without ever reaching the end of the mainspring. So I put the gloves back on and broke the movement down to the barrel to find out what had gone wrong. You don’t have to be a veteran watchmaker to spot the problem here.

There is no failure, only setbacks. I am glad that I hadn’t assembled the entire chronograph mechanism last night though. I’d still be dismantling if I had.

One thought on “Momentary Setbacks”