Here is a heavily used Seiko 7002-7000 diver’s watch which I picked up from a seller in the Philippines in non-working condition. I wanted to do something a bit special for the men in my family this holiday and since Seiko watches generally offer the most value, a 7002 diver seemed just the thing.

Seiko watches are legendary in the watch world for providing the precision and robustness that the average recreational diver can afford. The earliest diver models (62MAS and 6105) command a pretty penny nowadays but the later 6309 and 7002 models from the 1970’s, 1980’s and 1990’s can still be had by the common man. 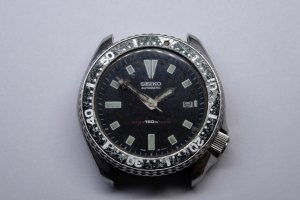 This particular watch is a 7002-7000 which was manufactured by Seiko in Singapore. The movement is a the autowinding 7002A which succeeded the 6309A. It has the date feature but lacks a day feature which can be found on the nearly identical 7006A movement.

One of the peculiarities of the 7002A movement is that it cannot be wound by hand. The stem has two positions, the first for changing the date and second for adjusting the time. When not extended the crown is screwed into the case like many other dive watches.

A cursory examination confirmed the balance staff was intact and the autowinder functioned properly. I was also able to change the date and time via the crown, however, as the seller stated the watch would not offer up a consistent beat.

Cosmetically the watch was not in a good way. The rotating bezel had seized up and the luminescent paint on the hands had grown a funny oxidation layer or perhaps even mold. The exterior was filthy with grime.

The inside was a bit better but as I began to break down the movement I was disappointed to discover a bit of rust. If too much was found the movement might prove unrecoverable.

The hands came off without incident and the dial appeared to be in fair shape although I think it might be an aftermarket replacement. The original 7002-7000 dials are notorious for having issues when the luminous paint ages poorly or the dial feet become detached. This dial had also lost a foot.

My anxiety peaked as I set eyes upon the rust staining the Holding Ring for the Dial– it seemed clear at this point I had made a terrible mistake; as the dial lifted away it instead became clear the “rust” was actually glue which had been used to secure the wayward dial to the movement.

Satisfied that the rust apparent on the top of the movement was localized, I proceeded to breakdown the bottom plate for cleaning with no further challenges apparent.

Although the movement seemed to be in relatively good repair I wasn’t sure the same could be said of the case. The evidence suggested this watch had lived a hard life.

I strapped on a pair of nitrile gloves and pried the bezel away from the case to expose years of accumulated grime.

The case is the old style 7000 case which uses a small ball bearing and a coil spring for the bezel click. In many cases the ball bearing will come loose and disappear; this one was still intact so I counted myself lucky.

The watch case is quite robust and I’m certain that is why they are so popular among divers. Above you can see the crystal, crystal gasket, chapter ring, bezel insert, bezel, bezel gasket, and case. Many pieces are needed to make a 7000 watch case.

Once the movement was nice and clean I performed a final close inspection and then had the added fun of removing “dial glue” from the bottom plate.

Reassembly was quite quick compared to some other automatic watches I’ve worked on. The Seiko 7002A movement uses a fairly simple autowinding system that consists of an Oscillating Weight, Pawl Lever, and two Reduction Wheels. There is no separate bridge assembly or click, and this economy saves a one bit of time during assembly. 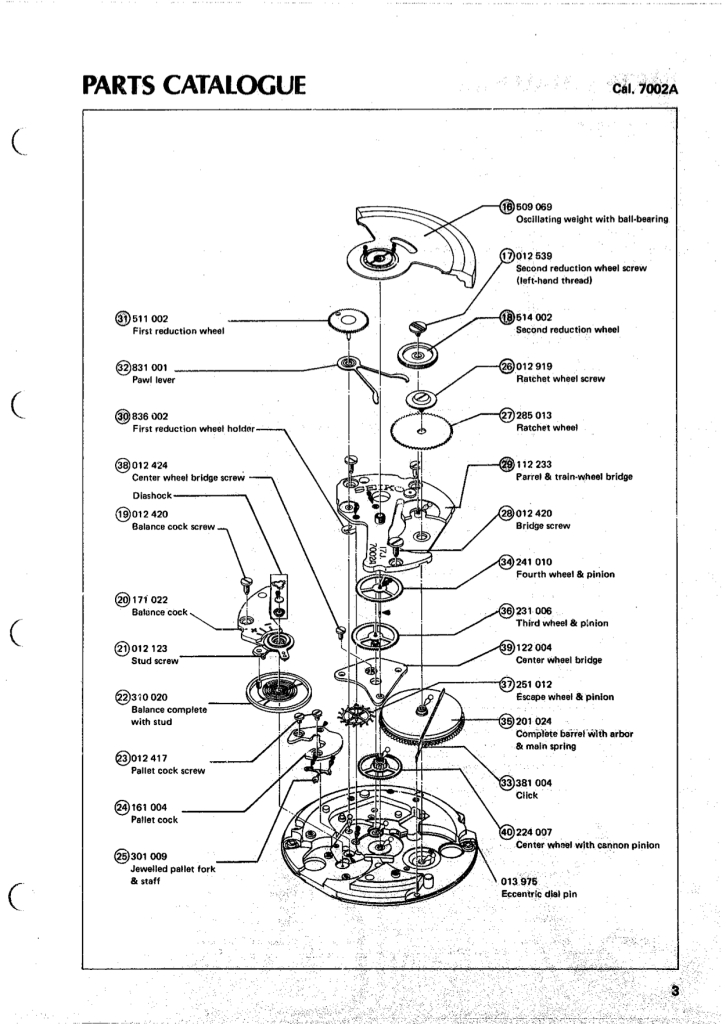 Properly cleaned and lubricated, the movement sprung quickly back to life and I began to feel really good about my investment.

I reused the original mainspring as a replacement was not readily available and the timegrapher reported an amplitude of between 220 and 250 degrees in each position. As I’ve come to expect from Seiko movements, the loss/gain among the various positions never exceeded 9 seconds per day.

Quite satisfied, I set to work replacing the lost dial foot. The correct solution for a lost dial foot is to resolder a new one in place, but not having previous experience with this task and knowing already that my skills with a soldering iron are rubbish, I elected to use a bit of JB Weld instead.

A replacement dial foot was turned on the lathe and “welded” to the dial with epoxy. Although it looked good, I then binned this idea when I discovered that aftermarket hand and dial sets can be had relatively cheaply. Seeing as the hands would have required replating, I’m happy changed direction.

The case was reassembled with a new mineral crystal and caseback gasket from my usual supplier. An aftermarket bezel insert was sourced to replace the heavily scuffed original and this snapped into place nicely with some pressure from the crystal press. The ultrasonic cleaner did its thing and thoroughly cleaned the case and bezel click which was then lubricated with a bit of lightweight oil, the end result being a bezel that held stiffly but was easy to rotate when one needed to time a dive. I finished the watch off with a generic oyster style bracelet.

I guess if I wanted to be nit-pickety I would point out that the luminescent paint on the hands is not the exact same shade as the paint on the dial, but otherwise there really isn’t much to fault here. This project turned out just the way I hoped it would. There were some challenges to be sure but in the end, my father received a beautiful Seiko watch from his son for Christmas; a watch which keeps good time and came straight from the heart.