Service of a 1975 Bulova Accutron

Here is yet another Bulova Accutron 2181. This one came to me as a toss-in with a second Railroad Grade Accutron I purchased for restoration. The dial is customized featuring the Kerr-McGee logo and on the caseback is the engraving “Presented to Willard Lane 25 years of service 1976 Kerr-McGee”. I don’t know much about Kerr-McGee outside of the Silkwood incident so I’ll refrain from opining. 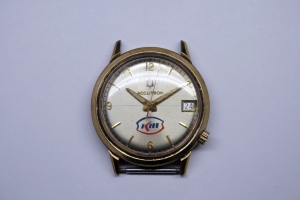 I’m unlike most vintage watch enthusiasts in that I have an affinity for watches with personalized engravings. They give a little more life to a piece and fill in its back story. This watch was obviously token of appreciation offered to Mr. Lane back in 1976. It seems to me that it would have been a fine gift as Accutron watches were considered the most well-engineered mechanical watches at the time. Sadly they were also reaching the end of their run as more economical quartz watches were pushing Accutrons from the marketplace.

Just like every other Accutron I’ve purchased, this watch was not running properly, in fact even with a new cell it wasn’t running at all. There was little risk involved in attempting to repair the piece as the cost of acquisition was low, so I pulled the Stem and commenced disassembly.

The movement had bits of debris scattered throughout but was in exceptional condition. The screws and plates had few visible scratches indicating that this watch may have never seen service in the past.

The battery that came with the watch was dead and acid leakage had caused it to grow a fuzz on its exterior. Being a silver oxide battery the acid had not damaged the plates.

I disassembled the calendar works first on the bottom of the Main Plate.

This Accutron is the model 2181 which is slightly different from the model 218D. Externally appearing identical, both the 2181 and the 218D are built on the 218 base movement and both versions have a simple date feature. The main difference between the two is that the 218D secures the Date Trip Spring within a groove in the Date Bridge. This minor modification keeps the spring from pinging across the room during disassembly.

There were no gremlins to be found beneath the dial, nor under the Train Bridge and this gave me a bit of anxiety. I worried that perhaps the problem with this watch was a failed Coil Assembly.

It doesn’t take much to stop an Accutron movement cold but I was a bit concerned that I hadn’t found any issues during disassembly. In fact, the movement looked better than every other Accutron movement I’ve worked on thus far.

I reassembled the movement without issue until the time came to set the Train Bridge.

Most of the jewels in the 2181 movement are capped requiring oiling via an auto-oiler (unless you want to go through the trouble of pushing out the jewels). I had completed oiling of the jewels and reset the bridge but a misaligned Index Wheel pivot caused the jewel to come free from the bridge. How lucky I am that the jewel gave way before the pivot failed! A quick reset with the jeweling tool rectified the problem.

Assembly now complete, I installed a new cell and immediately heard the tell-tale hum of the vibrating Tuning Fork Assembly. A bit of adjustment to the Index Finger and Pawl Finger Assembly started the wheels of the gear train turning and I set the movement aside to settle in.

Now my intention is to resell this watch in order to secure funds for other watch projects. Unfortunately as I stated before, most enthusiasts frown upon modification, customization, or personalization of vintage timepieces. Not much can be done about the caseback but I did happen to have a replacement dial and hand set available which was free of the Kerr-McGee branding.

I installed these parts and re-cased the movement. A new crystal completed the service.

I checked on the watch after letting it run for twenty-four hours and was surprised to see it was only off by a few seconds. On both previous projects I needed to allow the watch to “settle in” for a few days before the timekeeping became consistent. Again, this watch had proved itself as the best of the three Accutrons I have seen.

With pieces like this it’s tempting to try to locate the original owner. You wonder if the watch was lost or stolen or perhaps simply unloved. I think Mr. Lane has probably passed on but I’ve been unable to determine why his Accutron re-entered the market. Considering the condition, I don’t think this watch got a lot of wrist time but I can only speculate as to why. Perhaps Mr. Lane was an avid enthusiast who already had a Rolex on his wrist or maybe he was happily married and never removed the unassuming timepiece his wife had gifted him many years before.  Who knows? Hopefully this watch will find a new owner who is as enthusiastic about the provenance as he or she is of the exceptionally engineered movement inside.